Dream World Thailand is a classic European-style fantasy land, theme park with exciting rides & snow town and full of all the characters from Hollywood and Disney cartoon characters.

Dream World Tickets – Benefit when book with us

Visited Dream World and a great day out after tired of shopping . His kids love the speedy mouse ride , torpedo (roller coaster). There was a lot of photo opportunities there so bring spare battery or charge it up.

The rides were not that new and the park was also old, but my kids enjoyed themselves nonetheless.

“A trip down memory lane”

Samuel L, from Bangkok , TripAdvisor May 2017

This visitor visited Dream World Thailand for many times since he was young. He decided to revisit with his girl friend and his brother. He admits the rides are for children, but if you get a re-entry on all rides passes then your day will be worth spent at this place – going on the roller coasters and other adult rides again and again. The highlight was starting at 14:30 at the Holywood action show or stunt man show. He would come again for nostalgic reasons.

It was a good day. My kids loved it, especially after riding the hurricane, tornado, roller caster and the boat ride. Overall, it was a reasonable day out with a lot of fun.

Thishanie, from Sri Lanka, TripAdvisor May 2017

Loads of attractions to see and a day is not simply enough! All the thrill rides are a must for anyone’s game for a bit of an adrenaline rush. Must try the Tornado, Viking and Sky Coaster!!! Will scare the hell out of anyone.

A real surprise and can describe it as a low budget cross between Disneyland and Universal Studios with a Thai/Hollywood stunt show. Entrance fee to park was AUD $34 and good value for money. Well worth the trip out there.

The park has less people and do not need to queue that long. Dream World close at 05:00 p.m. but normally the theme park close at 07:00 p.m.

The Visitors consisted of Thai and foreigner has to pay 2 pricing which cause unhappiness. She did not like the food and critique that was very old rides compare with neighbor countries . There are snow town and wet zone that needs to pay more. Don’t bother going with kids under 110 as there is very minimal and boring rides and nothing for younger kids.

“much boring such average”

This is the most average place I’ve ever been to the people there is average and the rides are average basically everything was average.

Children under 90 cm. will be admitted free of charge if they shared a seat with their parents.

Supersave ticket includes 26 rides, one time per ride only 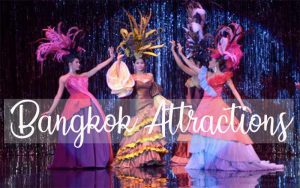