What is Phuket Fantasea Show?

Phuket Fantasea is a great show in Las Vegas style and right proportion of good mixed of Thai culture, magical illusions and circus. The show has 4- dimensional effect, aerial ballet, acrobatics, pyrotechnics, special effects, elephant circus, (featuring over 30 elephants , 6 buffalo , 40 ghosts , 400 pigeons , and a lot of chicken ) & stunt into one unique and unforgettable theatrical masterpiece guaranteed to thrill and delight visitors of all ages or nationalities. Phuket Fantansea is excellent out class entertainment. The cultural show, food, buffet, elephants, dances, magic, games, specially shooting people, rain, decoration and much more which is difficult to describe.

Phuket Fantasea has gigantic Iyara theater ,which can accommodate 3,000 audient. The theatre is well designed with state of the art visual and effects.

Carnival Village is an area that has a souvenir shop and at 19:45 a viva Bangkok stage starts to perform.

The Similan Entertainment center is a place you can enjoy underwater world theme that you could have fun with games.

Tiger Jungle Adventure is a place with over 12 scenes that you could take pictures and selfie. Meet Pintong and Hommali , white tiger from Canada .

Huge restaurant can provide service for 4,000 guests. Wide range food is served at the Golden Kinnaree restaurant and exclusive with seafood Buffet is valid at the Suriyamas Buffet restaurant. If you eat less, you can go for a light snack or food course.

The Phuket Fantasea restaurant is also served at Halal and Vegetarian food. Phuket is the biggest Island in Thailand. There are so many beaches that you could stay. So , they provide transfer service to make sure you reach the theatre on time . On top of that , transfer service area offer in reasonable price.

If you reserve the transfer from add on, you must indicate your hotel and location so we can tell pick up time.

If any event that many visitors, Phuket Fantasea will open 19:30 and the gate will be open 20 minutes before show time.

You may think the tour agent like us may want to sell tour products. Yes, it is right. But we will be happier if you can satisfy with the service rather than upset with it.

In additional, we know you are busy to read lots of review. So we put together some catchy or good point opinion of previous visitors.

So we encourage you to read the former customer voice before making decision. We hope you find this useful.

Still Amazing since my 1st visit 13 years ago

Cultural & historical stage performance. Enhanced the performance via laser beam, Fluorescent & Pyrotechnic device. Not bad… I love most was the running chickens & goats across the stage and not to forget the 15 elephants on stage … soooo adorable.. we are Love It.

This is a cross between a fun park, a theme park, and a show. I guess that makes it a good family outing. The show was hard to understand with a mix of circus stage play and action. They take your phone with you when you go in an you have to retrieve it after the show. The park itself is a cross between a tourist gift shop and a fun park. Transport afterwards is hectic. We’re glad we went to see it, but won’t go again.

We visited Phuket Fantasea on the first day of our visit to phuket. The please is nice and well maintained . More entertaining to little children by way of games and kiddie shops , sort of like a Thai version of Disney land. The small eateries were good with good service. The main Fantasea show was truly breathtaking… wonderful acrobatics and animal participation with a dash of puppetry. Fireworks added to the wow effects.

It was followed by a fabulous multi cuisine dinner, which was superlative. On the whole a very enjoyable evening out for the whole family.

I expected to see more Thai dancing, So sad to see elephants, a cheetah, cattle, goats and hens on a stage at 10pm when they should be in their natural habitat. Instead , they’re made to perform. I can’t support this. The trapeze artists were fantastic and I must admit that the whole show was extremely well organized. Do not go solo like I did. I can’t recommend animal exploitation.

If you value your money, your sanity and animals you won’t waste your money on this show!! Besides the fact that the show itself is really badly put together, it is worse than a circus with animals! The elephants, chickens, buffalo and a baby tiger have to do tricks on stage while there are loud fireworks going off all the time! Just chaos and such a disappointment!!!

A waste of time and money

We were advised to add Fantasea to our brief 2 day itinerary as this was reportedly a good show. Our experience was rather different. The costumes and sets were impressive, but the quality of the programme barely met 20th century expectations, never mind 21st century. We felt that we had stepped 30 years back in entertainment terms. The highlights of the show were definitely the majestic elephants and the tiger, although not sure that we feel so comfortable with the training of animals to perform.We may be in a minority as the theatre was full, perhaps there are cultural differences and expectations. Maybe nice for young children if they are not frightened by the loud fireworks and pyrotechnics

Additional service such as hotel transfer service , upgrade dinner and upgrade seat can check on the booking above 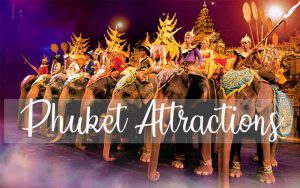